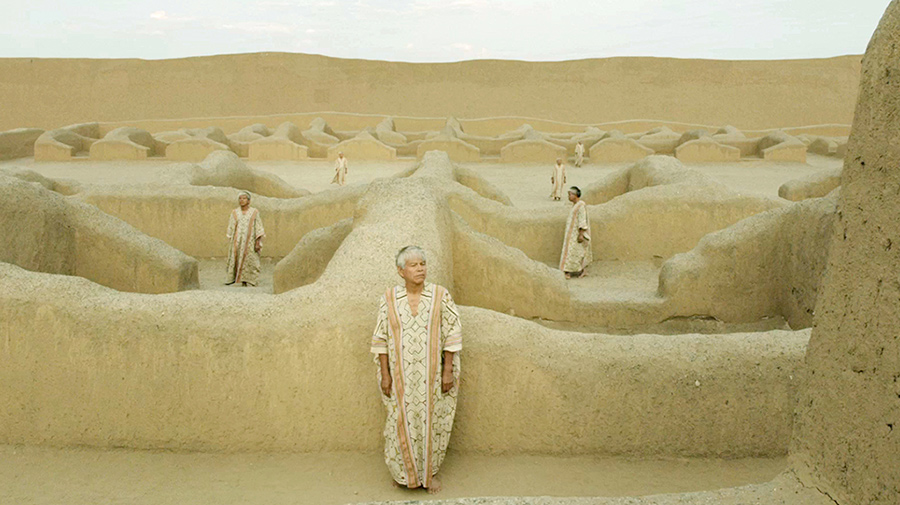 Looking for a miracle, Angelina lands at a healing center in the Peruvian Amazon where shamans minister to a group of foreign psychonauts seeking transcendence, companionship, and the secrets of life and death. Her perceptions altered by the ancient psychedelic plant known as ayahuasca, she bonds with Arturo, a young indigenous shaman who is losing his eyesight. In their hallucinogenic journeys together they attain a different sense of their destinies. She learns to accept her fears while Arturo, in turn, realizes that he will be able to see in the dark and sing his ceremonial healing songs, the icaros.

Icaros: A Vision is a story about fear and the release from fear – the fear of illness and of death, but also the fear of life and living. Set in an actual ayahuasca retreat in Peru, it features real shamans and indigenous non-actors from the Shipibo community, mixed in with western actors. Aspects of the film are based on co-director Leonor Caraballo’s true experiences. She had metastatic breast cancer when the shoot began. Although she dedicated herself to the project until the very end, sadly she died before she could see the film finished.

The film is also driven by the conviction that acknowledging the power of plants is the best way to change the jeopardized future of the Amazon, over the next 20 years massive tracts will be destroyed to produce only enough oil to sate U.S. demand for, at the most, two weeks.

Finally, the story takes place in Iquitos, the same town where Herzog’s Fitzcarraldo was shot more than 30 years ago, and the hotel Casa Fitzcarraldo hosts a key scene in the film.

Leonor Caraballo worked as a photographer and video artist between Buenos Aires and New York. She won important fellowships and grants, including the Latin American Guggenheim Fellowship, New York Foundation for the Arts grant and an Eyebeam Art and Technology Center residency. Her experimental videos have been shown internationally in venues such as the Tate Modern, PS1/MOMA, Artists Space, and Yerba Buena Center for the Arts. ‘Icaros: a vision’ is her first feature film. Her interest in the Amazon started when she was introduced to shamanism and plant medicine as practiced by the Shipibo-Conibo communities in Peru. She traveled to the Amazon and up and down the Ucayali river, experimenting with her life, death and artistic practice. Leonor died on Saturday January 24th, 2015 before completing the film.

Matteo Norzi is a visual artist, from Uruguay and Italy, living in NYC. His explorative artistic practice took him through several extensive journeys along six continents. His art has been supported by important institutions, including Art in General, NY; Headlands Center for the Arts, CA; Artists Space, NY; Spinola-Banna Foundation for the Arts, Italy. As part of the collaborative duo Isola&Norzi he has exhibited internationally at venues such as GAM, Turin; NMNM, Monaco; David Roberts Art Foundation, London; Fondazione Bevilacqua La Masa, Venice; Museion, Bozen. ‘Icaros: a vision’ marks his debut as a feature film writer and director. He brings with him years of personal experience and extensive research on Shipibo-Conibo history, culture and knowledge.